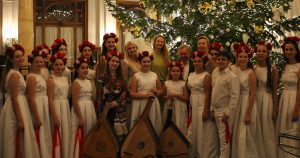 RCLIN Group organized and sponsored the Montreux Christmas Gala, where a magical Christmas atmosphere was created by an award-winning children’s chamber choir, performing traditional Christmas carols and festive songs. Guests were left speechless and some were quite moved after the incredible performances of ‘Ave Maria’ along with a number of other Christmas classics.

The concert was made possible with an immense contribution and invaluable advice provided by Mr. Werner Schmitt, founder of Yehudi Menuhin Forum in Bern and a former Director of the Bern Conservatory, which he headed for 20 years.

After the concert, one of the honorary guests, Philippe Furer, remarked: “These young performers have brought us into the world of magic…To believe it, you had to be there and listen to them: a great privilege!”