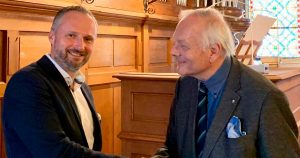 RCLIN Group pledges support to the completion of the restoration works of the Grand Organ of Sacre-Coeur in Montreux, as part of its social responsibility program focused on supporting local heritage and cultural initiatives in the places of its presence.

Built in 1905 by the Th. Kuhn House of Maennedorf near Zurich, the Grand Organ of Sacre-Coeur of Montreux is the only authentic instrument born at the turn of the last century that has survived in the French-speaking Switzerland.

The great efforts to restore the Grand Organ to its former glory were initiated by Georges Athanasiadès, a renowned Swiss intellectual and organ player, who is an honorary member of the Franz-Liszt-Societies in Budapest and Vienna, a recipient of the Rünzi Prize in Switzerland for his achievements in theology, literature and music as well as of the Gold Medal of the City of Paris. It was thanks to Philippe Furer, who agreed to take the lead of the mobilization efforts and formed the Association of «Renaissance des Grandes Orgues du Sacré-Cœur» in 2007, that by 2017 the majority of the renovation budget of CHF 1,295,533 was contributed by donors and the major works took place culminating with the inauguration concert on September 02, 2018.

The final works are planned to be completed by July 2019 and RCLIN Group is proud to be part of this incredible project.